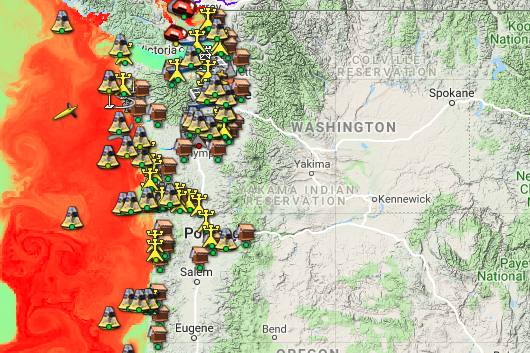 The world’s seas are increasingly awash with data. There are sensors attached to buoys, autonomous sail drones, ships and satellites, each churning out a constant stream of information about water temperature, wave height, currents and more.

A new strategic alliance launched by Gov. Jay Inslee’s office wants to harness all of that data —and collect even more of it — to slash the maritime industry’s carbon emissions and increase its efficiency by 2050.

Washington Maritime Blue, as the organization is known, hosted what it called the “Blue Forum” at Seattle’s Pier 66 on Tuesday to discuss how technology and data can be combined to transform the shipping industry. Roughly 100 people from maritime and tech companies, shipping unions and research organizations attended to discuss how the maritime trades can benefit from making virtually all of its operations digital and using AI, big data and “Internet of Things” tech.

Technology companies including Wartsila, Cybereason and Microsoft discussed their efforts to bring these changes to the maritime business, and oceanographic researchers described how the data they pull from ocean sensors can be used for commercial purposes.

Seattle is “a place where maritime and tech overlap like no other place in the world,” said Cosmo King, the CEO of the Seattle startup ioCurrents, which provides data-driven ship monitoring systems.

Chris Jones, of the Bellevue-based blockchain company Dragonchain, said he came to Tuesday’s event because his company is sure maritime shipping can benefit from blockchain technology, but Dragonchain’s executives aren’t immersed in the world of shipping. That’s often the case with tech companies, maritime experts said Tuesday. People see shipping and fishing vessels powering in and out of places like Seattle’s Elliott Bay, but they don’t understand how how the business works, its scale and the unique challenges it faces.

“Everyone recognizes what blockchain can offer but there’s still some question of how to implement it,” Jones said.

Joshua Berger, Gov. Inslee’s maritime industry liaison, who also serves as chairman of Maritime Blue’s board, said in an interview that the organization’s goal is to get everyone from shipbuilders to ship owners and the crews who work on the vessels to pay attention to carbon emissions, the impact of vessel noise on ocean life, and other environmental concerns. The organization is also pushing for a better-trained workforce and for fewer accidents at sea and in port.

If the maritime industry were a country, it would be the sixth-largest emitter of climate-warming gases in the world, said Berger, a maritime industry veteran and boat captain with a master’s degree from Seattle’s Antioch University. He added that increasing shipping efficiencies — which would make the maritime trades vastly more profitable — could reduce those emissions by 20 percent.

The effort to make these technologies standard across the shipping and fishing industries comes at a time when the maritime trades are is highly fragmented, with each sector, port and company often operating within its own silo and using its own legacy technology.

Many ships are more than 45 years old, which complicates efforts to digitize all of their systems, said Anuj Chopra, vice president of Americas for Right Ship, a maritime safety and environmental risk company. Smaller family-owned businesses with two or three vessels are conducting business the same way they have for decades and don’t have free capital to upgrade. Many vessels, he said, still run Windows 3.1 on their computers.

“How many of you remember Windows 3.1?” Chopra asked the audience with mock incredulity.

Over the last few years, he said he’s seen a “tectonic shift” toward what he called the “smart ship” — a vessel connected, monitored and even controlled by an onshore command center.

Berger and other experts discussed autonomous underwater robots conducting maintenance on ships, hybrid engines running on both conventional fuel as well as electric and liquefied natural gas, onshore monitoring of all of a ship’s systems — and using AI and other technology to spot faltering equipment and repair it before the situation escalates into a catastrophic hazard or expense.

Data can be used to steer ships into more efficient routes, shape hulls for efficiency and noise reduction, time ships’ arrivals at port so they don’t have to wait inline to offload their cargoes, and even avoid terrorists and pirates during their voyages, experts said.

Olympia and the maritime industry take the need for a tech overhaul in the maritime industry so seriously that the Legislature recently provided $5 million to build a new Maritime Blue headquarters, in partnership with the Port of Seattle, that will serve as a hub for the organization’s efforts.

The state Office of Economic Development and Competitiveness, which employs Berger, says the size of the global maritime industry could double to $3 trillion if the climate-friendly, tech-driven efficiencies are deployed. That’s a gobsmacking number when you consider the industry’s current size. Hagen Anderson said Tuesday that 90,000 merchant vessels are currently in operation worldwide. A single ship loaded with 20,000 containers, he said, can carry a cargo valued at $1 billion.

Maritime Blue is expected to announce a formal partnership between Olympia and the Norwegian government to work together on the problem, said Lisa Brown, the director of the the Washington State Department of Commerce, who attended Tuesday’s event.

Norway’s ambassador to the U.S., Kåre Aas, whose country is on the forefront of deploying technology to reduce shipping’s impact on climate, also made a brief appearance at the forum and challenged Maritime Blue to make the seagoing trades more sustainable and efficient decades ahead of the 2050 timeline set by Inslee’s office.

“A cooperation between Washington State and Norway is strengthening and increasing,” Aas said. “I see great potential for that to continue.”