Air Travelers Can’t See All of It, but More Tech Is Moving Them Along 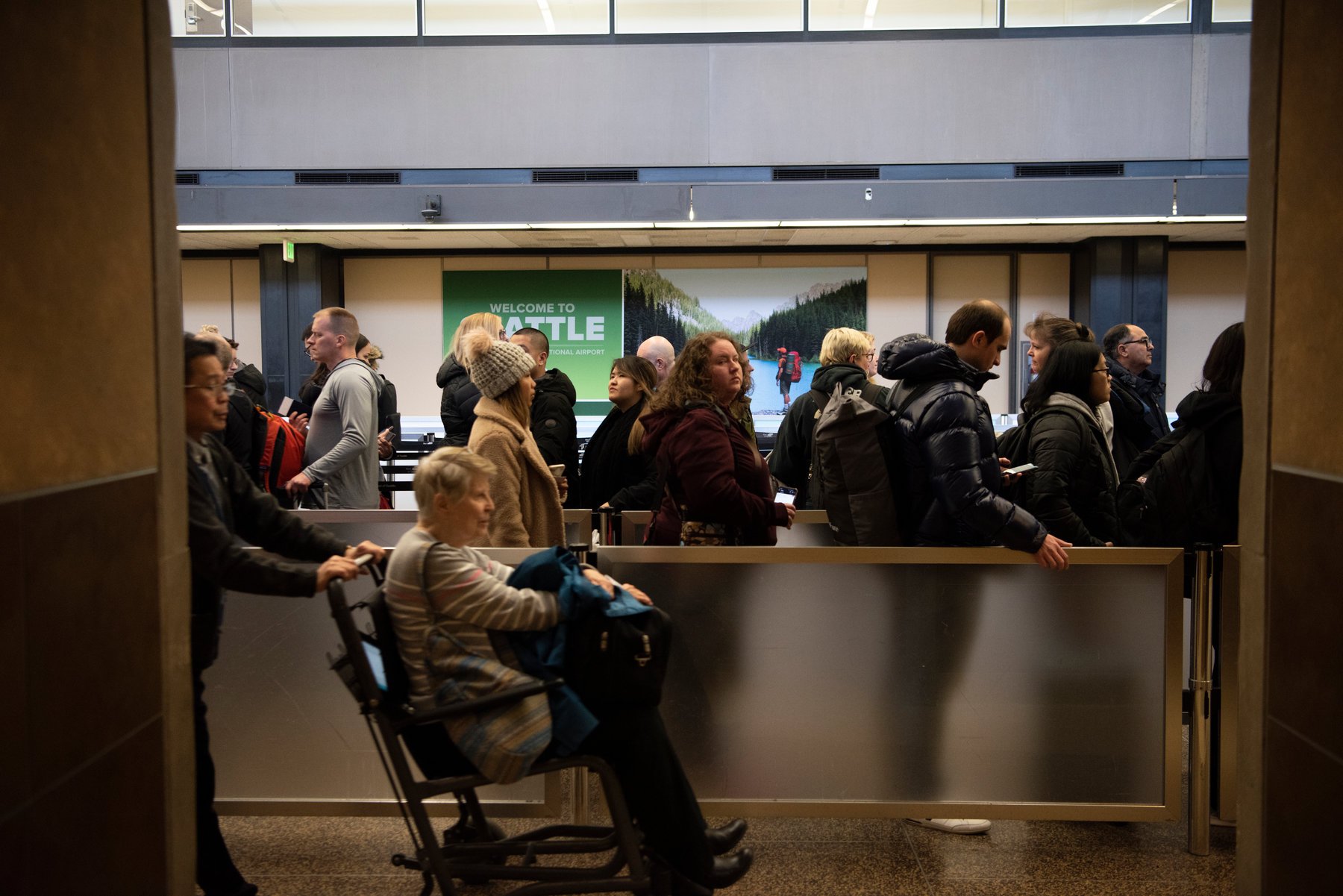 As more people fly, airlines and airports are relying more heavily on artificial intelligence to speed their trips.

This article is part of our continuing Fast Forward series, which examines technological, economic, social and cultural shifts that happen as businesses evolve.

Airports, often hemmed in by neighborhoods, highways or water, already struggle to keep up with the rising number of air travelers. And the number is expected to keep going up — to more than seven billion globally by 2035, an airline trade association says, nearly doubling from 2016.

So while airports are expanding their physical facilities where they can, governments and the travel industry are leaning more heavily on technology, especially artificial intelligence, to process more air travelers more quickly.

The airports in Osaka, Japan, and Abu Dhabi have tested autonomous check-in kiosks that move themselves to help manage peaks of passenger flow.

Seattle-Tacoma International Airport and Miami International Airport are among those using visual sensors to monitor passenger line lengths and how quickly people are moving through security checkpoints. Managers can use the information to adjust where they need more workers and to send passengers to shorter lines. Passengers can see how long their wait will be on signs or on a phone app. The goal is to help reduce travelers’ worries about whether they are going to make their flight.

For international flights, more airlines are installing what are known as self-boarding gates that use a photo station to take and compare a photo of the traveler with the picture in the person’s passport and other photos in Customs and Border Protection files. The gates, which are using facial recognition technology, replace agents who check boarding passes and identification cards.

Seven percent of airlines have installed some self-boarding gates, and about a third of all airlines plan to use some of this type of gate by the end of 2022, according to SITA, a technology company serving about 450 airports and airlines. Sherry Stein, head of technology strategy for SITA, said the goals are to reduce hassle for passengers, speed boarding and increase security.

Still, there are privacy concerns over the use of the photos. The general public doesn’t receive much information about how the photos will be used or stored, said Oren Etzioni, the chief executive of the Allen Institute for AI in Seattle.

“So even though we consciously give up our privacy, we still worry that these kinds of digital records can be used against us in unanticipated ways by the government, our employer, or criminals,” he said. A photo taken at the airport leaves another digital footprint that makes us more traceable, he added.

The Department of Homeland Security said it did not retain photos of U.S. citizens once their identities were confirmed at airports.

Technology similar to that used in self-boarding gates is being deployed for some foreign passengers arriving in the United States. Miami International Airport, for example, began using facial recognition screening at its facility for international passenger arrivals in 2018 and reported that it can screen as many as 10 passengers per minute using the technology. Travelers who have been to the United States previously step up to facial recognition stations, and a customs official checks their passports to make sure they are valid. First-time visitors still need to present a passport or visa and agree to have their fingerprints and photos taken.

Some of the new technology is aimed at easing language difficulties. Kennedy International Airport in New York recently installed three A.I.-based real-time translation devices from Google at information stations around the airport. Travelers choose their language from a counter-mounted screen and ask their questions aloud to the device. The device repeats the question in English to the person at the station. That person responds in English, and the device translates that aloud to the travelers.

Artificial intelligence is also being used behind the scenes to reduce the time airplanes spend at the gate between flights, which can mean shorter waiting time for passengers who have boarded and buckled up. London-Gatwick, Québec City and Cincinnati/Northern Kentucky airports are among about 30 around the world testing or installing a visual A.I. system made by the Swiss company Assaia. The system uses cameras pointed at a plane parked at the gate to track everything that happens after the aircraft lands: how long it takes for fuel and catering trucks to arrive, whether the cargo door is open, and even if employees on the ground are wearing their safety vests.

While humans can do each of these tasks, monitoring and analyzing the operations of these various functions can speed the turnaround of the plane and prevent accidents, according to Assaia. After the same plane has, for instance, been filmed doing hundreds of turnarounds at a particular airport, the A.I. system can identify the elements or situations that most often cause delays, and managers can take corrective action. Accidents like ground crew injuries or service vehicle collisions can also be analyzed for their causes.

The time an airplane spends waiting for a gate after landing or waiting in line to take off could also be reduced. A group at SITA focused on airport management systems is helping to design technology that can synthesize data from many sources, including changing aircraft arrival times, weather conditions at destination airports and logistical issues to improve runway schedules and gate assignments.

The data streams get even more complex when the whole airport is considered, Ms. Stein of SITA said. A number of airports are creating a “digital twin” of their operations — using central locations with banks of screens that show the systems, people and objects at the airport, including airplane locations and gate activity, line lengths at security checkpoints, and the heating, cooling and electrical systems — monitored by employees who can send help when needed. These digital systems can also be used to help with emergency planning.

The same types of thermal, audio and visual sensors that can be used to supply data to digital twins are also being used to reduce equipment breakdowns. Karen Panetta, the dean of graduate engineering at Tufts University and a fellow at the Institute of Electrical and Electronics Engineers, said hand-held thermal imagers used before takeoff and after landing can alert maintenance crews if an area inside the airplane’s engine or electrical system is hotter than normal, a sign something may be amiss. The alert would help the crew schedule maintenance right away, rather than be forced to take the aircraft out of service at an unexpected time and inconvenience passengers.

At the moment, people, rather than technology, evaluate most of the data collected, Dr. Panetta said. But eventually, with enough data accumulated and shared, more A.I. systems could be built and trained to analyze the data and recommend actions faster and more cost effectively, she said.

Air travel isn’t the only segment of the transportation industry to begin using artificial intelligence and machine learning systems to reduce equipment failure. In the maritime industry, a Seattle company, ioCurrents, digitally monitors shipping vessel engines, generators, gauges, winches and a variety of other mechanical systems onboard. Their data is transmitted in real time to a cloud-based A.I. analytics platform, which flags potential mechanical issues for workers on the ship and on land.

A.I. systems like these and others will continue to grow in importance as passenger volume increases, Ms. Stein said. “Airports can only scale so much, build so much and hire so many people.”